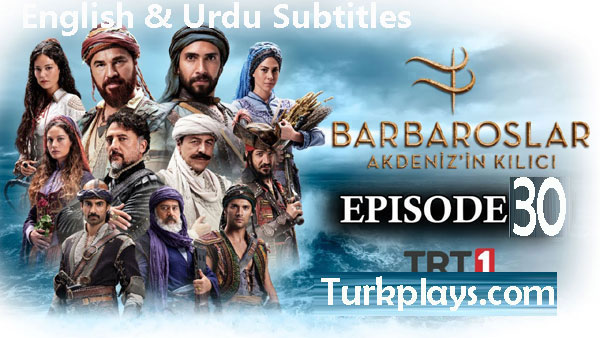 In Barbaroslar episode 30, after releasing Gabriel, Oruj returns to Kelemez and immediately starts looking for Sahbaz. Gabriel begins to struggle to lose the Priesthood. Gabriel said Sahbaz would do more damage to Turkey if he deployed his men in Kelemez. Oruj goes to customs but cannot find Sahbaz there. Sahbaz realizes he has to leave Kelemez and asks his men in town to attack everyone.

A man shoots Oruj, but Antoine sacrifices himself to save his friend’s life. Oruj asked the sailors to immediately bring Antoine to the city. Meryem says she will secretly take a boat in the bay to catch Sahsenem. Doctors removed the bullet from Antoine’s body but said he lost a lot of blood. Hizir understands that Meryem will go to the bay and stop Sahbaz.
Meryem says Hizir will definitely come. Oruj says Pasha defended Sahbaz all this time and insisted he will be punished. Oruj says he will not let Pasha do any more damage to the island and asks Hamzah to take full control of the island. Hamza accepts this offer and asks Pasha to swear allegiance to Oruj.

The doctor said Antoine’s life was in danger. Dervish put his hand on Antoine’s chest. Meanwhile Antoine began to dream. Antoine saw his lover, who had disappeared many years ago, and began to talk to him. Antoine’s lover said he had become a Muslim before his death and asked him to help his friends. Antoine awoke not long after. Sahbaz goes to the island and continues his journey, setting a trap.
Some men help Sahbaz escape. Shahin deeply regrets his sister’s murder and says he will take revenge on her. Hizir saves Meryem and says she will get well soon. Pasha said Oruj could never defend the island, but Hamzah asked him to follow government orders. Oruj comes later and says Sahbaz went to Modon with Meryem. Hamzah asks Oruj to provide evidence in this case.

Hizir goes to Modon Castle and asks Gabriel to deliver Sahbaz. Gabriel said Sahbaz was already a Venetian citizen and would never betray him. Sahbaz and Shahin start fighting but Dodge stops them. The doge offered Hizir a chest full of gold to quit his job, but failed to convince him. Antoine entered the basement that night and heard a man reading the Koran. Then Antoine saw the dervish and told him his dream.

Pasha says he wants to help Ilyas. Hamza asks Oruj to stop preparing for war, but he cannot convince him. Sahbaz said he would send many pirates to Kelemez and put his men in Pasha’s place, and Dodge liked the plan. Elias talks to Oruj to bring the ship he bought to the port and gets his approval. Oruj again asked Elias to come back, but he didn’t change his mind.

In Barbaroslar Episode 30 While Isabel was talking with Oruj at the inn, Pietro displayed there in a substitute appearance and began bantering with them. Pietro said that he was amazingly anxious to meet Oruj and that he would meet with him eventually. After Dervish appropriated food to the down and out kids in the street, Pietro stopped him. Pietro said this older individual was letting it be and endeavored to chat with him. Dervish said Pietro couldn’t do anything.

Barbaros 30 Pietro deserted killing Oruj and invented a plan to get him alive the next day. Sylvio read the strange letter sent by Unita and said that he would now start their course of action to control all Muslims. Khizir let Oruj in on that he expected to save Esther and the book. Oruj said he doesn’t have a boat yet and they need to make a point by point plan. Sylvio was incensed with Isabel before long for supporting Oruj and forewarned her unequivocally.

In Barbaroslar Episode 30 Oruj and his troopers stealthily came to Kalymnos. Radko comprehended that this was a catch and expected to enlighten Pietro immediately. Oruj started to move towards inside the royal residence step by step. Pietro found that Oruj had attacked the island and immediately disguised the book in a puzzling spot in his room. Khizir freed Esther from the jail and mentioned that Oruj return her to the boat quickly.

barbarossa 30 Oruj went to the takeoff point with the horses he took from the stable. Khizir and Niko glanced through all around the room yet couldn’t find the book. Khizir began to examine the dividers of the room and after a short time found the baffling compartment in the divider. Ishaq noticed Yorgo crying outside the lodging and said he wanted to kill him. As Khizir planned to escape with the book, Pietro came into the room and said he wanted to kill them.