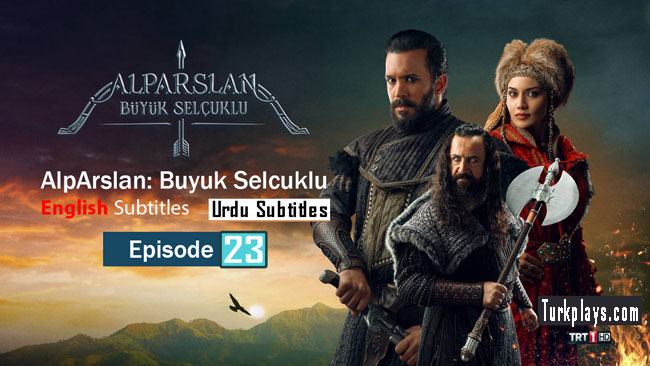 In Alparslan buyuk selcuklu Episode 23 While Alparslan is returning to the tribe with Akca, Rati soldiers attack them. Karaca sees Suleiman and Caghri in her dreams and starts to get more and more uncomfortable. Suleiman asks his wife to stay calm. Selcan sees Alparslan talking to Akca and tells this to Caghri. Caghri thinks his son will get married soon and gets happy. Caghri learns that Rati has bought soldiers from Herve. Kekaumenos tells what happened to him and thanks Diogenes for what he has done.

Alparslan buyuk selcuklu Episode 23 Rati asks the Lord for land and rank. The lord says he will give land first, but the rank issue is difficult. Gevher visits Karaca and says that Alparslan will get married soon. Karaca realizes that Akca is actually a double spy and starts making a plan to eliminate her. Alpagut tells Alparslan what Diogenes did in the castle. Alparslan asks Akca to go to the castle. Before leaving, Yinal cuts Ferzat leg slightly and gives him a dagger during the journey. Ferzat says he is injured and takes a horse from the Alps. Rati and Ivan plan an attack to retake the Armenian village from Alparslan.

Alparslan buyuk selcuklu Episode 23 Akca goes to the castle and says she wants to talk to the Lord alone. Akca says that the Turks know Herve and that Diogenes gave Dukas to Alparslan. Alparslan learns that Ferzat has escaped and gets angry with Yinal. Alparslan orders the other criminals to be executed in the village square. Kekaumenos learns that Diogenes is actually a two-faced man, but does nothing about it. Rati and Ivan return to the castle. The lord is angry that he couldnt take the village back. Yinal says he is innocent about Ferzat.

Lord tells Evdokya and Alpagut what Diogenes has done. Lord says that he will get rid of him after a while, but first, he has to solve the Liparit brothers issue. Diogenes says that some Armenian villagers want Turks. Rati says he will kill the villagers and take over the village. Akca talks to Akinay about marriage preparations and asks her for help.

Everyone in the tribe is taken aback by this. Caghri agrees to talk to the Lord. Akinay sees some Byzantine soldiers coming to the tribe and starts looking for her son. Lord says he has been thinking about the things he talked to Caghri for a long time and wants to make a deal with the Turks. Akca tries to take Akinay to the tent but fails. The Lord says he will give the Turks a safe line of passage so they can go west.

The lord kills the soldiers next to him and returns to the castle with Alpagut. Caghri says this deal is very good for the future and learns who Alpagut is. Akinay gets very angry with Akca for hiding the truth and kicks her out of her tent. Dukas slowly begins to recover. Alparslan goes to the Armenian village and tries to talk to the villagers. The attackers suddenly attack and capture Alparslan.

Alparslan episode 23 He was the heir apparent to the Seljuk Sultan Alp Arslan, and his family and lineage are called Seljuk, Al-Seljuk, Seljuk or Slajik after his name. Seljuk was a mujahid man. Whenever the savage Turks marched towards his territory, he would shield himself in front of them and fight with his infidel brothers and slaves to save the lives and property of the Muslims.

Alparslan buyuk selcuklu Episode 23 After Seljuk’s death, his son Israel (Arsalan) led the Seljuk Turks across the river for thirty-two years and took a significant part in the battles that took place in Samanid, Alak Khani and Ghazni. In 9 AH, Sultan Mahmud of Ghazni captured Israel and imprisoned it in the fort of Kalingar (India). Where he died seven years later in 5 AH. His son escaped from the Ghaznavids and reached his relatives in Bukhara. This massacre is the supreme heir of the Roman Empire, which ruled Asia through Czechoslovakia until 6 AH / 5 AD, and was succeeded by the Ottoman Turks.

Alparslan buyuk selcuklu Episode 23 As long as Sultan Mahmud of Ghazni survived, he did not dare to confront any group of Seljuks in the face of his immense military might and tact. The Pai Seljuks began their campaign against his successor, Sultan Masud. Massoud was devoid of the virtues of his great father, so he could not handle his vast empire. For many years there were battles between the Ghaznavids and the Seljuks, sometimes the Ghaznavids were defeated and sometimes the Seljuks.

Alparslan buyuk selcuklu Episode 23 Finally, in 9 AH, Tughral Beg and Chaghari Beg Dawood decisively defeated Masood Ghaznavi in ​​a bloody battle between Surkhs and Marwa. As a result, the Ghaznavid Empire collapsed in its eastern regions (Ghazni, Punjab, etc.) and the Seljuqs became the masters of Khurasan’s destiny.