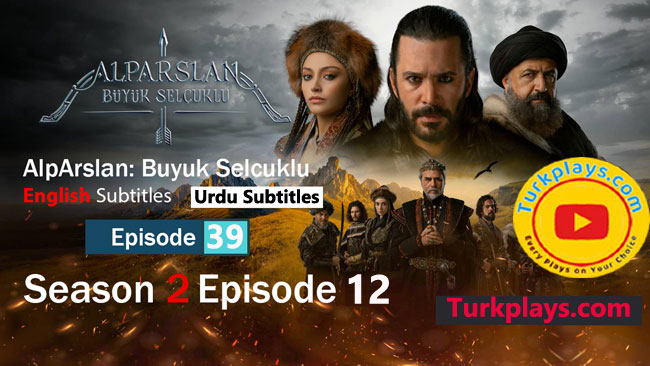 Alp Arslan Sahib disguised himself with his troops and went to the fort of Basasiri. The Amir believes that the Turks who have come to his palace are a party sent by the Caliph. Alp Arsalan Sahib says that he wants to pick up the stone as soon as possible, but Amir stops him.

When the Amir saw the written order of the Caliph, he asked his guests to stay in his palace. Amir says that Alp Arslan is a dangerous person and manages to convince his guests. A member of the group from Egypt wakes up in the forest and slowly starts asking for help.

When Sulaiman Sahib got the news of Ameer’s plan, he was worried. Alp Arslan informs him that he plans to take the stone secretly that night. Sifriya Khatun kills the Vaspurkan commanders one by one and tells everyone that they are planning a coup. The woman claims that Sifriya is lying and orders her imprisonment.

Batur and Arbaskan told the woman to be calm. Sifriya Khatun says that they will send the army back from Bukhara as soon as possible. A beggar comes to Yinal Sahib and asks him to go somewhere. Yanal Sahib knows that this person is a spy and goes where he says.

The priest stops Yinal Sahib and tells him that Effendi knows everything. Yenal Sahib learns that the priest is a spy working for the Turks and goes to talk to Effendi to save his life. Amir then goes to see a Sahir who works in his palace. The seer asks Amir to be very careful.

Gregor realizes Yenal’s betrayal and is furious. Alexander says, they will kill Yenal Sahib. Meanwhile, Yinal Sahib arrives and confesses everything. Alexander could not bear it anymore and stabbed Yanal Sahib in the shoulder. Gregor calms everyone down and says that he trusts Yenal Sahib now.

Amir takes Alp Arsalan Sahib to see the stone. The injured person sought help in the forest. Alp Arsalan Sahib goes to see the stone with his friends and kisses it. As Alp Arslan leaves the room, the seer comes and asks him who he is. Alp Arslan says that he will get the door key from Basasiri during the meal. A group of traders found the injured man in the forest and took him to a medical center in Baghdad.

The seer gives Amir a piece of paper and asks him to keep it in his mind. Khatun can’t take it anymore and says they have to kill Bukhara soldiers. After thinking for a moment, Arbaskan is convinced that the woman is right and immediately prepares to kill the soldiers.

Alparslan Buyuk Selcuklu Episode 39 Urdu Subtitles
Arslan Yusuf was very angry at what his daughter had done and slapped her. The Sifriya woman says that her father has now left to cross the border and send the soldiers back into the jungle.

After reading this message, Amir thought for a while and started doubting Alp Arslan Bey. Ameer finds out that these people are lying and secretly planning to kill him. Alp Arslan realizes that something is wrong and tells his friends to be careful. As soon as Yenal Sahib left the fort, he went to the palace and started talking to the Sultan. Watch english subtitles

Alparslan Buyuk Selcuklu Episode 38 Urdu Subtitles
Tughril Sahib first talks about what Effendi has done and then says that he trusts Yenal Bey too much. Alp Arslan Bey realized Amir’s trap and ran away. Tughril informed Yenal Sahib of his plans and asked him to recruit the rebel Turks into his army.

Alparslan Buyuk Selcuklu Episode 39 Urdu Subtitles
Alp Arslan Bey goes to the edge of a ditch and tells Amir to stop. Alp Arsalan Sahib then threw the stone on the ground and it broke. As Ameer tries to understand what is happening, Alp Arsalan Sahib attacks him with arrows. Alp Arslan later meets the man in a secret place in the forest and gives him the sacred stone.