The refugees crisis in Italy 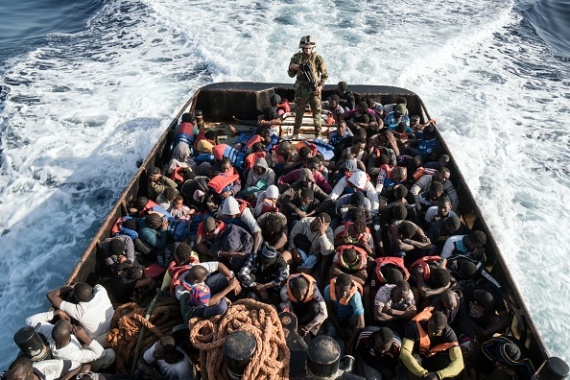 The refugee crisis in Italy is associated with the European Union refugee crisis which is emerged by the high numbers of people reaching EU from outside especially across the Mediterranean Sea or overland entrance through South East Europe. The number of refugees coming in EU were start increasing in the year 2010 due to the confluence of wars in the Middle East particularly in Syria, Iraq, Yemen, Afghanistan and terrorist insurgency in Nigeria and worsening law and order situation in Libya due to civil war.

All these factors contribute towards a rapid increase in the number of people seeking asylum inside EU. Moreover, before entering the EU these migrants initially sought refugee in relatively stable countries which are comparatively nearer to Europe like turkey, Lebanon, Jordan, Iran and Pakistan.

But the living conditions of refugees in these countries are very poor and many of these countries don’t allow these refugees to work for living. As the wars in this region does not seems to end soon so these refugees aim to get permanently settled anywhere and EU with it’s soft laws based on human rights values and non discrimination gives them a glimmer of hope for a bright future.

Although refugee crisis is a common issue for all EU countries but Italy in particular had suffer the most because of it’s geographical location. Italy is located on one side of Mediterranean Sea while on the other side is African continent having countries like Libya. So Italy had a direct impact of African refugees coming across the Mediterranean Sea in search of a better life.

The number of refugees mainly arrived in Italy through sea and stats shows that these were on peak in the year 2016 when a total number of people arrived on the Italian coast were around 181,436. However, in the last few years these numbers had decreased considerably for example in the year 2020 these numbers were around 34,134 while in the first half of 2021 around 24,576 people tried to seek asylum inside Italy.

In the past Italy had not pay proper attention to this problem due to which many problems originated like Italy has seen a quick rise in racism incidence across the country. Moreover, other EU countries like Germany and France didn’t fulfill their duties as well to mitigate this issue by sharing the burden of refugees and didn’t allow the migrants to enter their territory or some how made it difficult for the Italy to manage the crisis on it’s own.

This resulted in the serious human rights violations of the refugees coming on the Italian coast. Although, Italy had done well in the last few years to mechanize the immigration process and also set up few immigration camps on the Libyan side and had involved in many joint ventures along with the Libyan forces across the Mediterranean sea to keep a check on the refugees coming to Europe in an illegitimate way.

The large number of refugees present inside Italy has created many problems domestically like increasing Racism, domestic violence and management and administration issues. Other EU countries are reluctant to open their borders for the immigrants move inside Italy and thus the EU unity is at stake due to the refugees crisis. There are very serious human rights violations made by Italian forces against the illegal immigrants tried to enter the country.

Italy’s vulnerable geopolitical position had remained evident in terms of refugee’s arrival. Since 2011, the fall of two stable but autocratic governments of Ben Ali and Qaddafi that had long been playing an important role in European externalization strategies had put extra pressure on Italy and Rome had been demanding for a more even distribution of costs and responsibilities of the control, search and rescue (SaR) tasks along the one of most sensitive part of the EU’s external borders.

Italy’s isolation in the political debate over the reforms on migration policy set up by EU is evident from Germany’s policy to unconditionally accept Syrian refugees by unilaterally suspending the bounding’s of the Dublin rules. While on the other side Germany had reintroduce the systematic checks at the Schengen borders with Austria. After that the tensions had been grown between Italy and Germany on issues like the adoption of hotspots as tools to improve and control both Italy and Greece refugees with same rules which include the identification of asylum seekers and to the addition of their biometrical data in the Eurodac database. There are areas which make the relationship between Italy and Germany quite complicated is external dimension of EU’s migration policy.

Both Italy and Germany are agreed upon the necessity of cooperation regarding refugees crisis and but had differences regarding the financing channels and the quota system. Europe is experiencing a change in its politics, society and culture. It’s narrative of a common market with open internal borders based liberal democratic values has shaped it’s present form. Euro scepticism these days with British exit from EU to take back control of it’s national borders, a populist party is sitting on opposition benches and rise of populist movement inside Italy it self is on the rise.

This shows that European system doesn’t work well for all countries and that less affluent countries are under the richer ones making them dependent on the richer states. The European mission of unity is under pressure because of an over flown wave of refugees entering the continent from North Africa and the Middle East. Moreover, the laws made by EU institutions are not uniform and become favorable to the one state and may not necessarily benefit the other.

In this scenario every European country is taking decisions unilaterally to protect it’s national interest which is a topic of concern for the European unity. The quota system hasn’t been implemented which is a long standing concern for Italy and a very few numbers successfully took asylum to the other EU states is pushing the country to pursue a more unilateral approach which could lead to the EU’s failure in terms of crisis management and carry out search and rescue operations and to protect them in vulnerable situation.

So it is evident that with the rising populist movements and differences among European countries regarding crisis and external immigration policies the European unity is in danger and could lead both Italy and the refugees to the deep waters of troubles. Moreover, the reception centers or camps set up by the Italian government for the asylum seekers now become hub of corruption.

These reception centers are given funds by the government through the ministry of interior which then funds these camps through public contracts offered in the regional offices. The rate set up by the government is quite reasonable but many private contractors who run these camps on a profit based model are very corrupt.

It is hard to estimate how much this business worth but recently a cooperative owner has been imprisoned on charges of making corruption close to 50 million euros. This situation made those claims that migration had become a business even stronger. Many corporate owners are investigated through out the country for corruption, misuse of funds, frauds, granting jobs and economic benefits in exchange of political favor.

This makes the role of many local NGOs working with in the system or monitoring the system hard to choose between to speak out or remain silent. Although they are quite vocal about their stance on human rights violations but they are also accused of corruption and running the migration business.

In their opinion, these NGOs make refugees believe that all they need to do is to go to the sea, being rescued and then later entered the Europe with ease. A British newspaper Frontex has claimed about the evidence of some NGOs having contacts with smugglers and guide them into those zones where the refugees had the best chance of being rescued and later sent to Europe.

So in a way they claim that these NGOs are assisting the human traffickers and are guilty of crime to assist those people that play with the human lives must be punished.

The refugees crisis in Italy with the largest inflow of migrants after the closure of Greece route has put pressure on the Italian government.

Italy though has managed the crisis by setting up more reception camps and pouring in a healthy amount of money to feed these refugees.

Italy has also signed Minniti agreement to keep a check on number of refugees reaching it’s territory. Italy also has set up strict verification process for the asylum seekers to enter the Schengen region.

There are concerns of the international community over the human rights violations committed by the Italian and Libyan forces. A lot of work still need to done for an effective search and rescue operation with in the Mediterranean sea. EU need to set up more balanced approach regarding migration policy.

Corruption cases are a concern for Italy in the privately owned profit based reception camps. Many NGOs are involved in human trafficking and had relations with the smugglers in Africa which is a big challenge for Italy to keep a check on them. Populist movements are also creating worries for the government and in future will intensified further to take central place in national politics.

Role of EU to mitigate these problems is not enough and will continue to be complicated with further populist parties coming to power. Racism, extortion, violence against outsiders will also increase with time already posing a major threat to the Italian government. The institutions will be weaken as the trend continued with the personalities getting more powerful.

A Libyan stability in future will assist Italy to carry out agreements like that of Turkey. Refugees coming through proper channel will required less time to get asylum inside EU. Italy has less populated South so in future Italy can settled refugees to that region which is a requirement of country as well considering the fact that Italian population is getting older with time and in future they’ll required younger people to carried out the responsibilities.

Moreover, the treatment of the refugees in Italy are in compliance with the EU laws of managing the external borders but still very much deviating to those of personal liberty, the right to move freely and not subjected to be inhuman and degrading treatment. From the Italian case a final lesson can be learned.

For EU states that are geographically exposed to refugees flows and their borders intercept with the outer boundaries of the Schengen area including Italy are developing an anti immigration or anti EU policy will remain short sighted and self defeating and these countries need the support from EU due to the fact that they alone couldn’t stop the refugees inflow. They also needed to manage it in an effective manner because this is the lone way to kept the Schengen area intact.

Zeshan Nisar is recently completed the MSC in International Relation. He looks closely at international affairs and political situation of world.. Social issues are his favorite subject.Contact him : zeshan.kiani170@gmail.com

Note: The Turkplays Web does not necessarily agree with the author and the comments below.